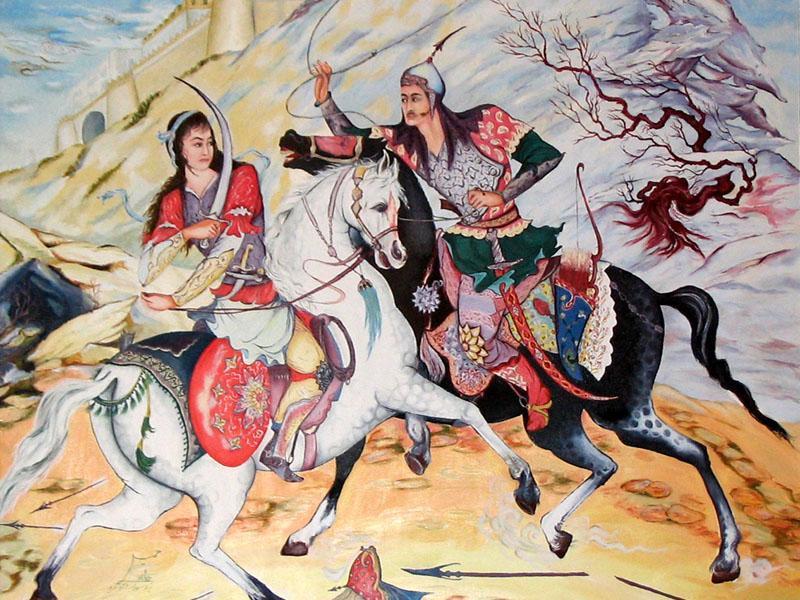 The art of miniature painting in Persia flourished from the 13th through the 16th centuries, and continues to this day, with several contemporary artists producing notable Persian miniatures. These delicate, lush paintings are typically visually stunning, with a level of detail which can only be achieved with a very fine hand and an extremely small brush.

The most important function in Persian Miniature was illustration. It gave a visual image to the literary plot, making it more enjoyable, and easier to understand. Miniature developed into a marriage of artistic and poetic languages and obtained a deep and sincere accordance with poetry.

Painter’s love of natural beauty, encouraged the Persian painter to depict the world from an ever-blooming, evergreen point of view; the flowers and the greenery that are to be seen throughout many a painting, not only impart a decorative touch to the composition, but also tie the various elements together and give a sense of balance to the work.

The artist must be knowledgeable about the psychological philosophy of human behavior and the true nature of objects, animals and plants, so that he can combine in his mind his ideas with the visual observations he makes, and so that eventually -aided by a hand which is guided by reason, and a reason which is controlled by emotions and ideas-his concepts are rendered on paper, effortlessly and vet precisely in accordance with the rules of the art.

The theme of miniatures became more limited as time went by. In the 17th Century there were mainly love scenes, portraits and some even copied European pictures. In the 18th Century there appeared a new genre of flowers and birds.

If you are interested to see to Persian miniature we strongly suggest you to visit National Museum of Iran that is contains various pieces of pottery, textiles, texts, artworks, astrolabes, and adobe calligraphy, from Iran’s post-Islamic era.